Y’all know what today is, right?

Second! as part of the three-novel compilation, Partners in Necessity, in February 2000, cover art by Michael Herring.

Third! as a mass market from Ace Books, in February 2003, cover art by Michael Herring.

Fourth! as part of two-novel compilation, The Agent Gambit, from Baen Books, in January 2011, cover art by Alan Pollack.

News you can use

The latest Liaden Universe® InfoDump has been posted here.

IMPORTANT ANNOUNCEMENT RE BOSKONE:
SHORT FORM: Sharon and Steve will NOT be attending Boskone this year; nor will they be taking part of the festivities at NarniaCon. We’re very sorry, and we will miss everyone.
LONG FORM: In this week’s Medical Lottery, Sharon won a biopsy at the Bangor Cancer Center on February 12. Those who have been following along at home will recall that Sharon also has a Stupid Immune System. Because of the uncertainty surrounding the results of the biopsy, she wishes to stay as healthy as she physically can be, should she need to return to the Cancer Center for an intervention. Conventions are notoriously germ-filled, and she has chosen not to risk contracting con crud, or – worse – this year’s version of the flu.
Steve has chosen to stay...
Read More
January | 2020

As previously advertised, Steve and I will be at Boskone.  In addition to our Duties to the Con, listed below, we are pleased to be Guests of Honor at NarniaCon, the convention-within-the-convention, run out of the coat check closet, naturally enough, in the Westin.  This year, NarniaCon will be hosting a scavenger hunt based on the game of Clue.

Fandom 2.0: Being a Good Fan
Panel: 4:00 – 4:50, Marina 3 (Westin)
Modern fandom has developed a wonderfully interconnected network, with instant access to authors, fellow fans, and fan communities around the world. This instant connectivity is neither good nor bad, but it can be used in ways that harm as well as help...

The front cover for Trader’s Leap, just like you’ll see it on bookstore shelves, at the end of the year. 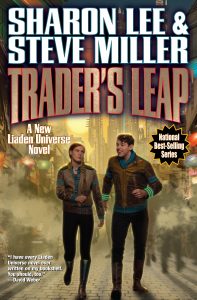 Those who have been with us for a while will recall that, back in 2012, Steve and I pitched five books to Madame at Baen, the so-called Five Book Dash.

Well, in the Way of Things Lee and Miller, the Five Book Dash became a Six Book Dash, and just yesterday, we got the cover art for the sixth book — Trader’s Leap — in the mail.

All art by David Mattingly.

in InfoDump | No comments

Coming up on the end of the year and the beginning a new decade.  Congratulations to all of us for getting this far together, and good luck, too, as the journey continues.

ACCEPTING THE LANCE NEWS YOU CAN USE
ACCEPTING THE LANCE, the 22nd novel set in the Liaden Universe® created by Sharon Lee and Steve Miller came out on December 3, and is now available in hardcover, ebook, and audio editions.

ACCEPTING THE LANCE hit the Number Three position in the Bookscan Bestseller List during the first week in December.

FREE LIADEN STORY
For those who may have missed its debut on the front page of Baen.com, “A Visit to the Galaxy Ballroom,” is available to be read, for free, at this link

in Five Minutes of Fame, Publication News | No comments

Bookscan reports that Lee and Miller’s Accepting the Lance, the 22nd novel set in their Liaden Universe®, debuted on its bestseller list at the Number Three position, behind  Dead Astronauts, by Jeff Vandermeer; and Rebecca Roanhorse’s Star Wars novel, Resistance Reborn.

Lee and Miller extend their thanks to all Liaden Universe® readers — give yourselves a hand!

Those who have been waiting (so very patiently) for the Audible edition of ACCEPTING THE LANCE, here’s your link.
Read More
December | 2019

For those awaiting the Audible edition

We have been in touch with Mr. Feldberg at Audible, who lets us know that the audiobook edition of Accepting the Lance will be available from Audible tomorrow.

“Tomorrow” from the reference of Mr. Feldberg and ourselves would be Tuesday, December 10.

Mr. Feldberg apologizes that the fact of the delay was not shared with us — so we could share it with you — there was an internal mismatch of schedules, which has since been resolved.