Steve Miller’s grandmother was the first one to believe in his career as a writer. Founder of the Brooklyn Poetry Circle and a Founding Member of the New York Poetry Forum she’d been awarded a Gold Medal for her work by the World Congress of Poets. Dorothea Neale’s circle of friends included writers, artists, poets, and princes. If her grandson wanted to be a writer, what was so strange about that? 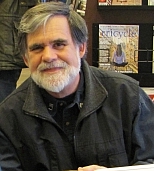 She fed his talent with books, read his early efforts and applauded his first publication. In time, Steve became a traveling poet, presenting his work at coffeehouses and rathskellers in the mid-Atlantic region — a career choice of which grandmother Dorothea fully approved.

In time, it dawned on Steve that eking a living as a performance poet in Baltimore, Washington, and environs was more about eking than performing, and that beer — even free beer — wasn’t necessarily a balanced diet.

He branched out into reviews, music and book; did a spot of reporting for the local papers, submitted stories to the science fiction magazines, articles to fanzines around the world, and became active in the local science fiction club, BSFS.

Steve’s fiction began appearing in the small press before he broke into Ted White’s Amazing in the mid-1970s. He was Vice Chair of the Baltimore in 80 WorldCon bid while he was editor of the science fiction tabloid Star Swarm News. When the News folded, Steve and partner Sharon Lee started Bookcastle & Dreamsgarth, Inc., a genre bookstore with a traveling convention SF art agency component.

In fact, Steve never gave up on the idea of traveling as part of writing. As of early 2015, he had attended hundreds and hundreds of science fiction conventions — as a fan, as a writer, and as an art agent.

Most recently, he’s traveled with Sharon Lee, his wife and co-author of the bestselling Liaden Universe® series. Together, they’ve published more than twenty novels of science fiction and fantasy, and dozens of shorter works, garnering a number of awards as well as invitations as Guests of Honor and Special Guests at science fiction conventions from coast to coast in the U.S. and Canada.

The 2015 Liaden novel is Dragon in Exile — which appeared in June of 2015 in hardcover and was a Bookscan Bestseller, hitting #3 in their hardcover lists in early June.  Other recent Liaden novels are Trade Secret which appeared in hardcover in November 2013 and also made the Bookscan bestseller list and Necessity’s Child, published in hardcover in early 2013. Baen has also produced multiple collections of Liaden Universe® short fiction, Liaden Universe® Constellation Volume 1 and 2, with Volume 3 out August 3, 2015.

Steve and Sharon are currently working on a five book contract for Baen, the first of those five books in the editor’s hands in February of 2016*. Alliance of Equals is the next Liaden novel, currently due in hardcover in July of 2016 while Dragon in Exile should be released as a June 2016 mass market edition.
—–
*It’s worth noting here that “due at Baen” is not at all the same as “will be published by.” Publication dates are on the knees of the Publisher. Generally figure close to a year,from due date.