At the tender age of fourteen, when the rest of her classmates were deciding on careers in nursing, as airline stewardesses, secretaries, and English teachers, Sharon Lee confessed to her mother that she wanted to be a writer. 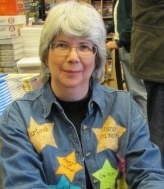 Her mother’s reply to this revelation was, “Real people aren’t writers.” Sharon took this to mean that writers got to invent themselves in ways that those in other career paths are not privileged to do — and this has proven to be so.

By day, a mild-mannered — not to say quiet to the point of invisibility — secretary, at night Sharon wrote.  She didn’t write well, but she did write a lot, and along about 1976, she entered a story in the Balticon X short story contest.  The story took first prize, thereby convincing Sharon that she was indeed on the right road.

Four years later, in very close order, she made her first fiction sale, to Amazing, quit her day-job, and, with partner Steve Miller, opened Bookcastle, a genre bookstore affiliated with the science fiction and fantasy art agency Dreamsgarth. Because of this, she got to go to a lot of science fiction conventions, met a lot of people, and slowly thereby became visible.

Dreamsgarth having long since gone the way of Bookcastle, Sharon nowadays travels to conventions as part of Sharon Lee and Steve Miller, authors of the Liaden Universe®.  With Steve, her husband and co-author, Sharon has published twenty-two science fiction and fantasy novels, and nearly four dozen short stories.  Under her own byline, she has written two mystery novels, a contemporary fantasy trilogy, and more than a dozen shorter works.

Sharon’s most recent book, published by Baen in January 2015, is Carousel Seas, the concluding book in the fantasy trilogy that begins with Carousel Tides and  Carousel Sun.

Dragon in Exile, the 18th novel-length entry into the Liaden Universe®, was released on June 2, 2015 from Baen Books.

The 19th Liaden Universe®, Alliance of Equals, is scheduled for publication in July 2016.

The Gathering Edge, Liaden Universe® novel number 20, is scheduled to be turned in to Baen in February 2016.

—–
*It’s worth noting here that “due at Baen” is not at all the same as “will be published by.” Publication dates are on the knees of the Publisher. Figure a year, at the least, from due date.