Yesterday on Facebook, fearless editor Jason Cordova revealed the not-quite-final cover of the upcoming Chicks in Tank Tops (Baen, January 2023), and the Table of Contents.

Lee and Miller have a story in this anthology, and so do a bunch of other talented writers, which adds up to quite a TOC.

Don’t take our word for it, though, have a look for yourself.

Chicks in Tank Tops Table of Contents:
“Gadreel’s Folly” by Sharon Lee & Steve Miller
“Hold the Line” by Kevin Ikenberry
“A Girl and Her K’t’ank” by Jody Lynn Nye
“Airborne All the Way” by David Drake
“Airborne: The Next Mission” by David Drake
“Goddess of War” by A. C. Haskins
“Barbie and Gator Ken versus the Hurricane” by Joelle Presby
“Jeanne d’Architonnere” by G. Scott Huggins
“Operation Dad Liberation” by Lydia Sherrer & David Sherrer
“Between a Knight and a Hard Place” by Philip Wohlrab
“Next Question” by Marisa Wolf
“Belle’s Fantastical Mechanical Beast” by Jason Cordova & Ashley Prior
“Mother” by Robert E. Hampson
“Tread Softly” by Esther Friesner

Below, the not-quite-final cover, art by Dave Seeley, inspired by the story “Goddess of War” by A. C. Haskins. 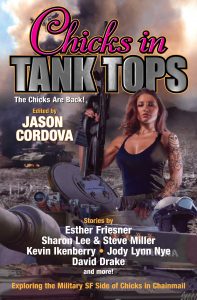