On the first Liaden Universe® front we’re finishing up a book — Accepting the Lance — to be turned in to Baen by the end of the month, with publication currently set for the end of the year. Watch for more news here or on Facebook.

What’s coming sooner than Accepting the Lance? To begin with, there’s Neogenesis in mass market paper. Last year’s hardback Liaden novel spent 2 months on the Locus Bestseller list and hits stores and sites on March 26, 2019. If you’ve been waiting for the small-size, it is coming your way: https://www.amazon.com/Neogenesis-Liaden-Universe%C2%AE-Sharon-Lee/dp/1481483927

Not long after Neogenesis an in demand collection arrives — Liaden Universe® Constellation #4, due out from Baen in June. Below is some of the preliminary PR (which may change before appearing on the publisher’s or distributor’s sites…) 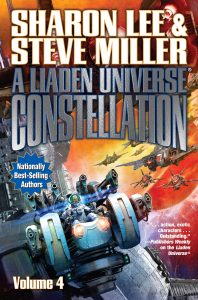 For more than thirty years, the Liaden Universe® novels by Sharon Lee and Steve Miller have captivated readers with their unique blend of action adventure, science fiction, and romance. In addition to twenty-one novels (and counting) Lee and Miller have written dozens of shorter works based in the Liaden Universe®, featuring the strong characterization, detailed world-building, wit, and derring-do that readers of the series adore.

This fourth collection is the bulk of Lee and Miller’s shorter Liaden works written across 2017 and 2018, and offers readers four novelettes, two novellas, and two short stories – including the celebrated linked stories, “Block Party,” and “Degrees of Separation.” Existing readers of Liad, and newcomers will enjoy the breadth and width of these interstitial works set in the nationally best-selling Liaden Universe®.

Quotes from the pros!

“Degrees of Separation” is a perfect gem, both alone and with “Block Party” as a sequel. Once again, Lee and Miller show themselves able to create intriguing new characters, as well as interesting clues to enlighten the re-reads of the earlier books and new ones. (Who knew the depths of subtlety a qe’andra might employ within the Code? ) Read fast or savored in a second or fourth reading, it’s a modest but sustaining masterpiece, like Don Eyr’s breads and pastries.
–Elizabeth Moon, author of Into the Fire

This series [is] . . . the premier place to find good romantic SF adventure. . . . strong characters finding their own way (and, often, each other) in an action-packed galaxy of worlds. . . . Every story stands on its own; readers don’t have to be familiar with the Liaden universe. Those who have had the pleasure, though, will find many connections to existing tales.” —Analog on A Liaden Universe Constellation: Volume 1.

You can find Constellation 4 on sale at Baen.com or through other major online venues…

Due Diligence  Due Diligence: Adventures in the Liaden Universe® Number 24, Pinbeam Books, July 2017

Friend of a Friend  Sleeping with the Enemy: Adventures in the Liaden Universe® Number 22, Pinbeam Books, July 2016

Also, and just out as the year begins, Sharon and Steve both have stories in Release the Virgins, a unique theme anthology edited by Michael Ventrella. Sharon’s story hails from Archer’s Beach and features Kate in her guise as Guardian, while Steve’s is a Liaden story set some time before Agent of Change begins …  https://www.amazon.com/Release-Virgins-Michael-Ventrella-ebook/dp/B07M6MJTQP/?fbclid=IwAR015hSsYs9sdMmA3Rs2Y9mkT_Dy-s_1wX6dDkxU3zgzACDfMQXACUJ_PSQ

If you’re still not sure … here’s the musical trailer! https://www.youtube.com/watch?time_continue=4&v=QchZ8bhapS4

Lee and Miller are waiting for final programming items to settle for Boskone this year  with current rates for the convention good until January 22. We expect to be doing readings, have a kaffeeklatsch, be on panels together and individually, and to have a Friends of Liad breakfast during the weekend. This is our only currently scheduled convention appearance of the year. Watch Facebook or catch us Friday at the convention for information of the breakfast location and time.