Thanks to our longtime readers and fans we’re finishing up the 25th Anniversary Year of the Liaden Universe® and what a grand year we’ve had. We’ve met and talked with many of you at conventions, the BEA, and on our Trade Secret book tour. Jethri’s adventures, like Theo’s, have brought round lots of commentary, and Trade Secret hit the Bookscan bestseller list at Number 6 — a real accomplishment in these days of movie and TV-tie-in domination of the Science Fiction bestseller lists. 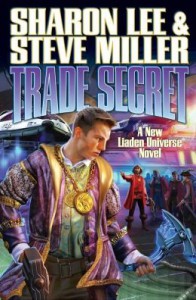 One thing we’ve been surprised by is how many of our readers tell us they’ve been with us (or our characters) since close to the beginning. To help us celebrate Trade Secret and our 25th year of Liaden publication please share with us your first Liaden experience — and how many titles you’ve read since then — and we’ll randomly select 5 lucky responders for a free Trade Secret audio book courtesy of Audible! We’ll be selecting winners based on replies received by midnight Friday,December 6 (our time in snowy Maine). You’ve got 5 shots — tell us how you got started in the Liaden Universe®!

Here’s the full complement of Liaden Universe® offerings from Audible!